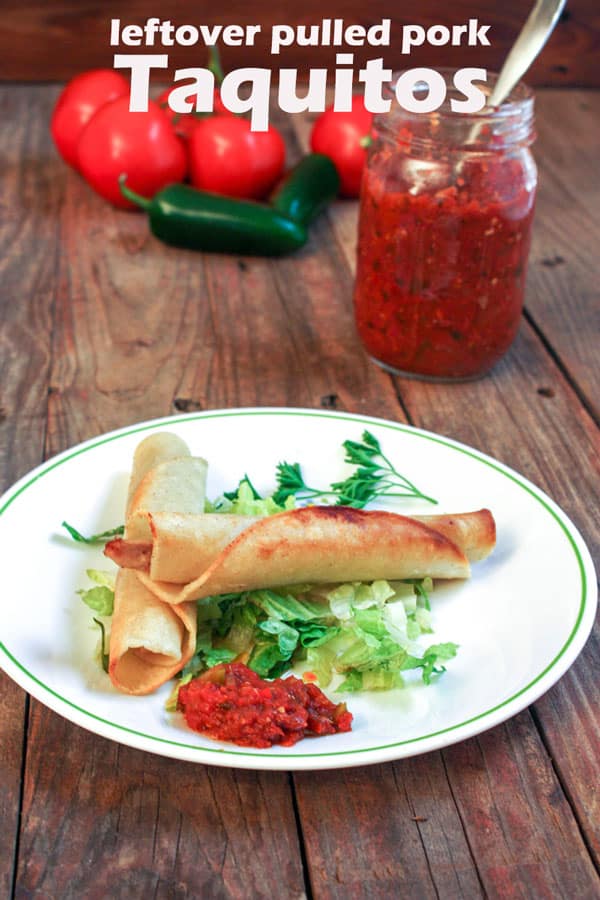 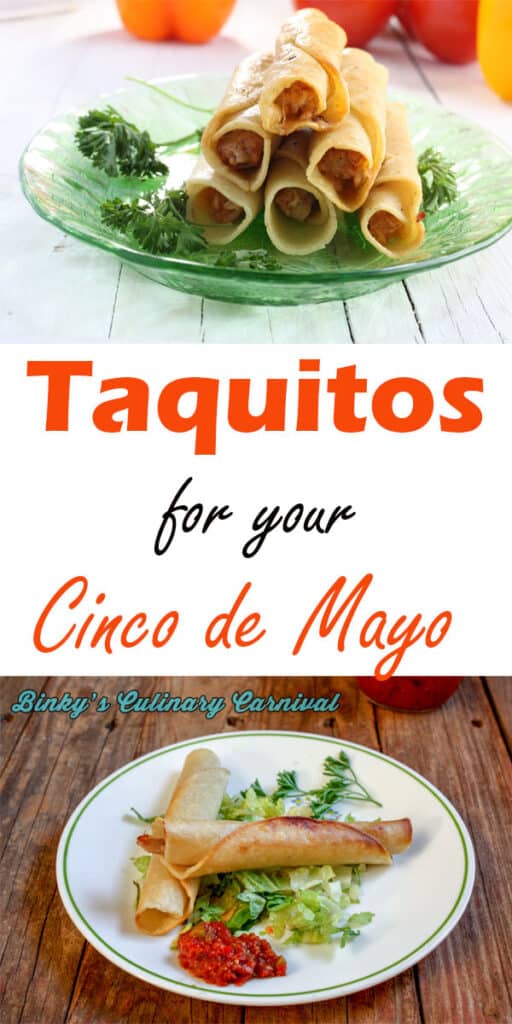 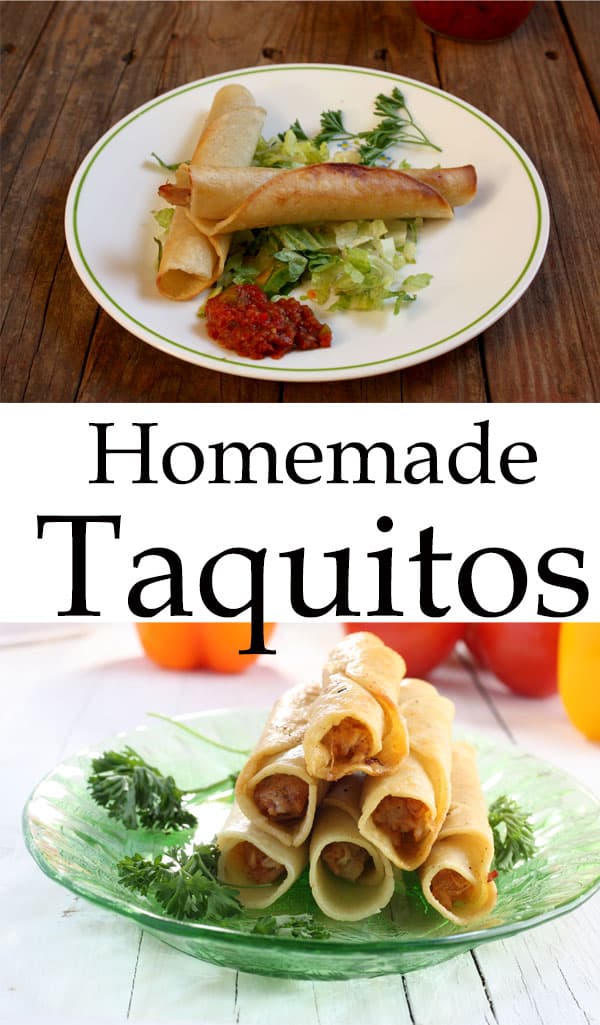 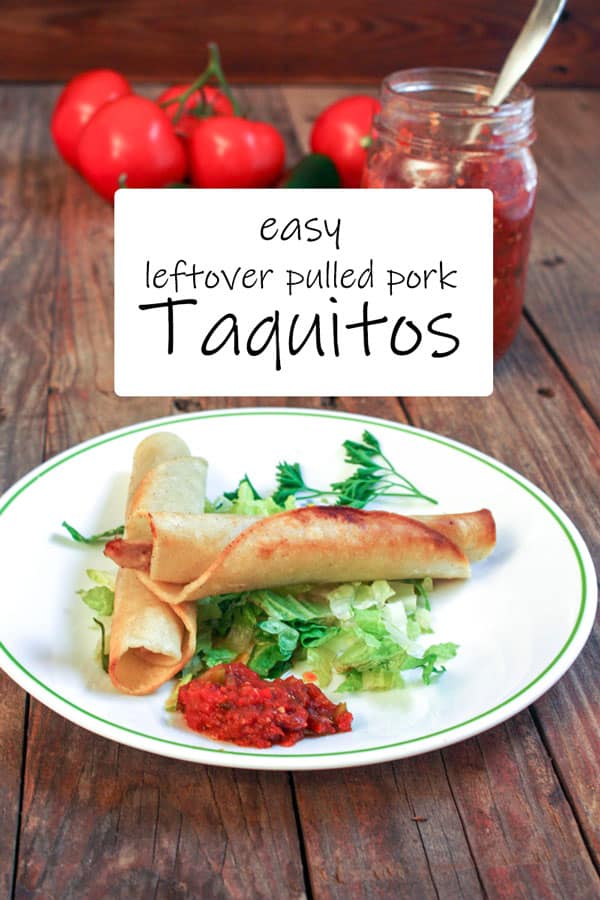 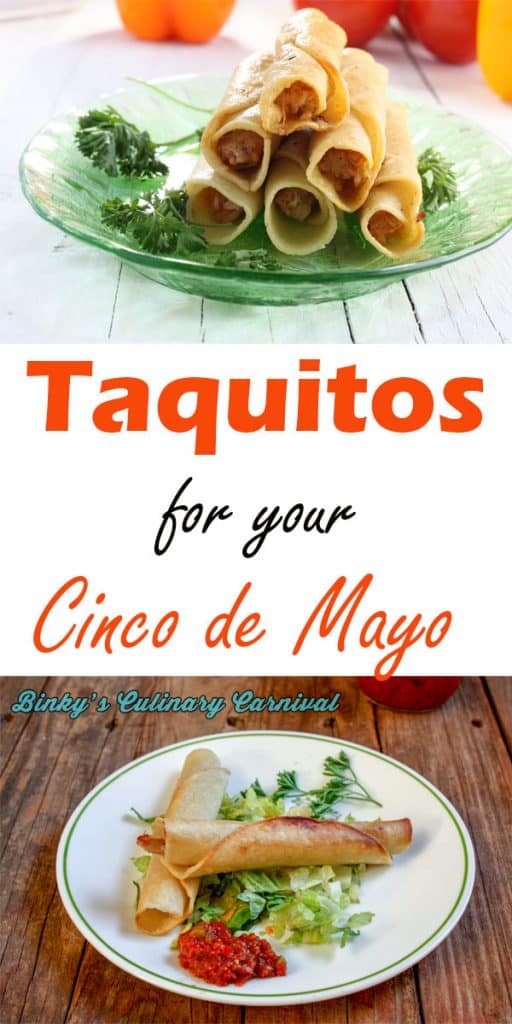 I have been getting a lot of requests for Venison Recipes, tis the season in Upstate NY. Before I met my husband, I would never eat venison. I had Uncles and Cousins and actually a lot of friends who were avid hunters but the prospect of eating it never interested me.

Like a lot of newly married couples we had NO money. So learning how to make Venison taste good was a priority. Namely because most of things my husband cooked with Venison were vile! Tougher than shoe leather and dried out hunks of yuck!

In the last 25 years, I have perfected some very good and very different recipes with Venison, like this Corned Venison.

Venison has 160 less calories per pound than a comparable cut of beef AND 4 grams of Saturated fat as opposed to 12 grams in Beef. That’s a huge savings! These taquitos are among our favorite venison recipes.

I got this Cookbook from my Aunt and Uncle for Christmas in 1980. It has lots of good recipes but everyone’s favorite is ‘Steak and Chorizo’ Taquitos.

As you know, if you have been coming here for any length of time, my family is crazy about Mexican cuisine! This taquitos recipe, is no exeption! Here are a few fun facts regarding taquitos!

I usually make them with Venison instead of beef now. The technique is super easy. Both the filling and the Taquitos freeze well and they are Gluten and Lactose Free! The taquitos are not spicy hot either, for those who don’t care for spicy foods. Of course, you can always add extra heat!

On to the Venison Taquitos Recipe 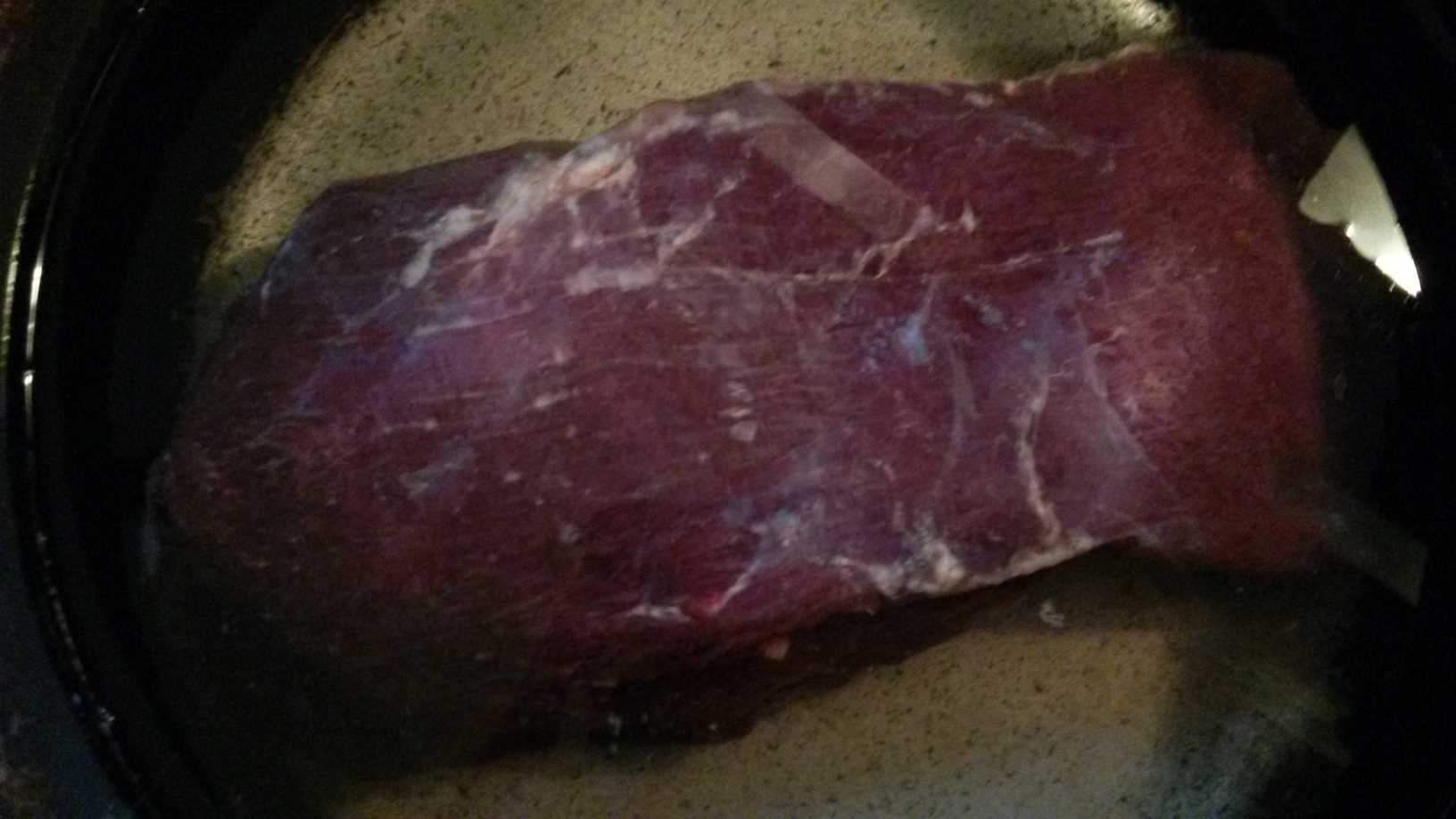 Place Venison Flank or Leg Roast in a large pot with a little salt. 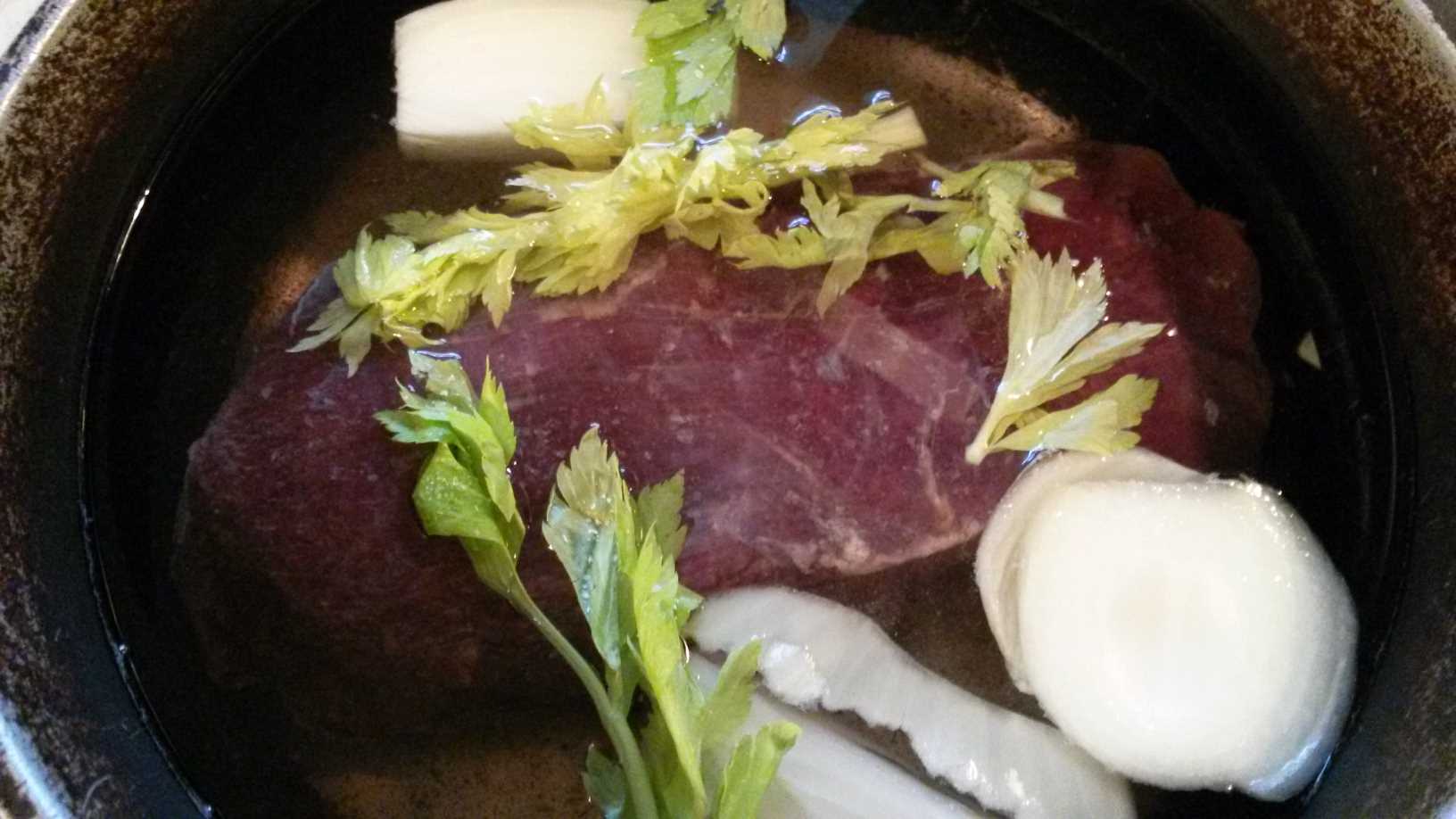 Add a few chunks of onion and celery to the pot.

Bring to boil and then reduce the heat to a mild simmer. Depending on the size of your roast it will take 1 to 2 hours to cook through. Let the roast cool in the water until cool enough to handle.

Place 1 or 2 small potatoes per pound of meat in small pot. Just barely cover the potatoes with water. Bring to boil over high heat and then reduce heat and simmer until tender. About 20 minutes depending on the size of the potato. Remove the potatoes when they are tender and let cool. At this point you can go clean the house or read a book until the meat cools! 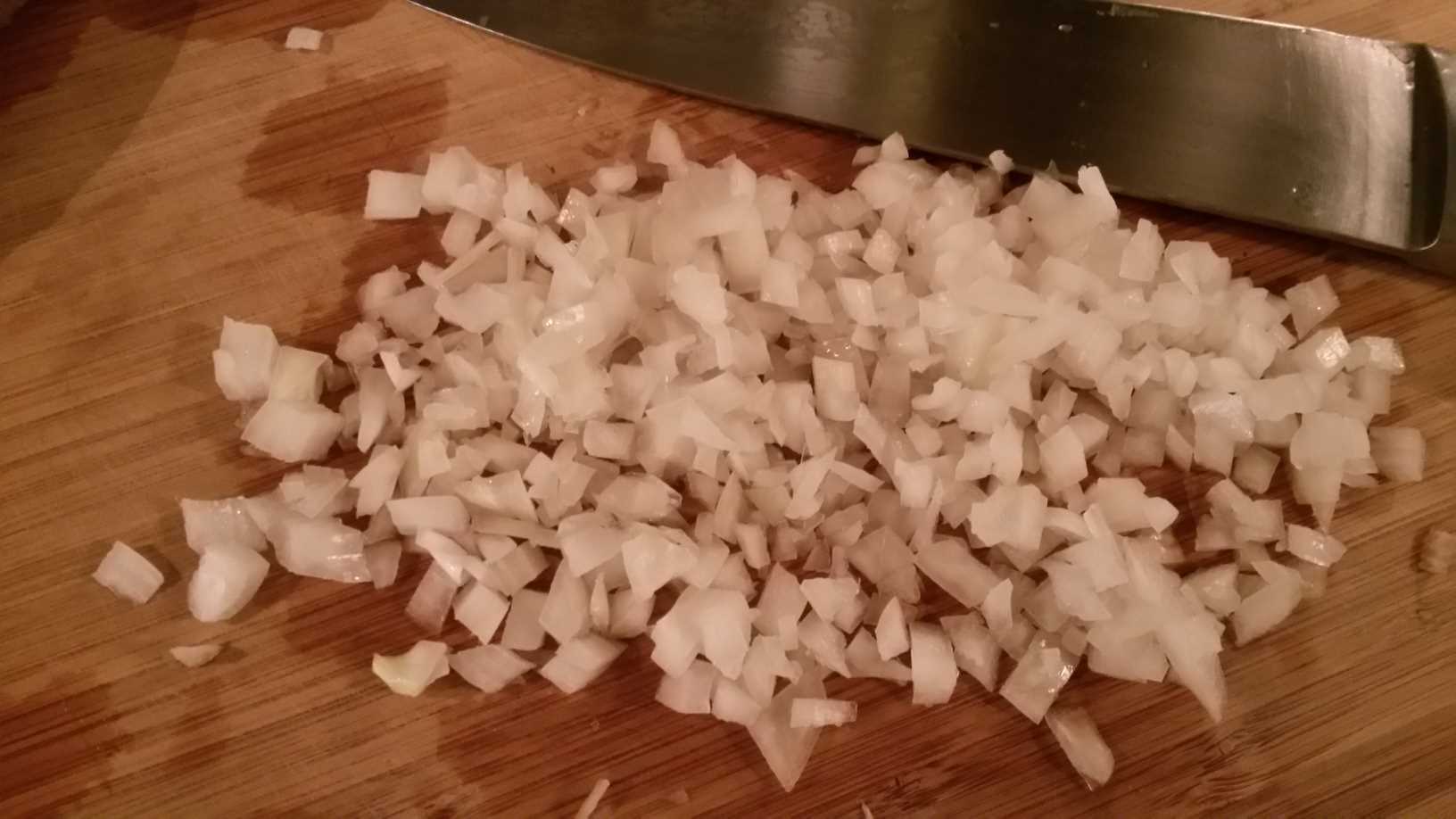 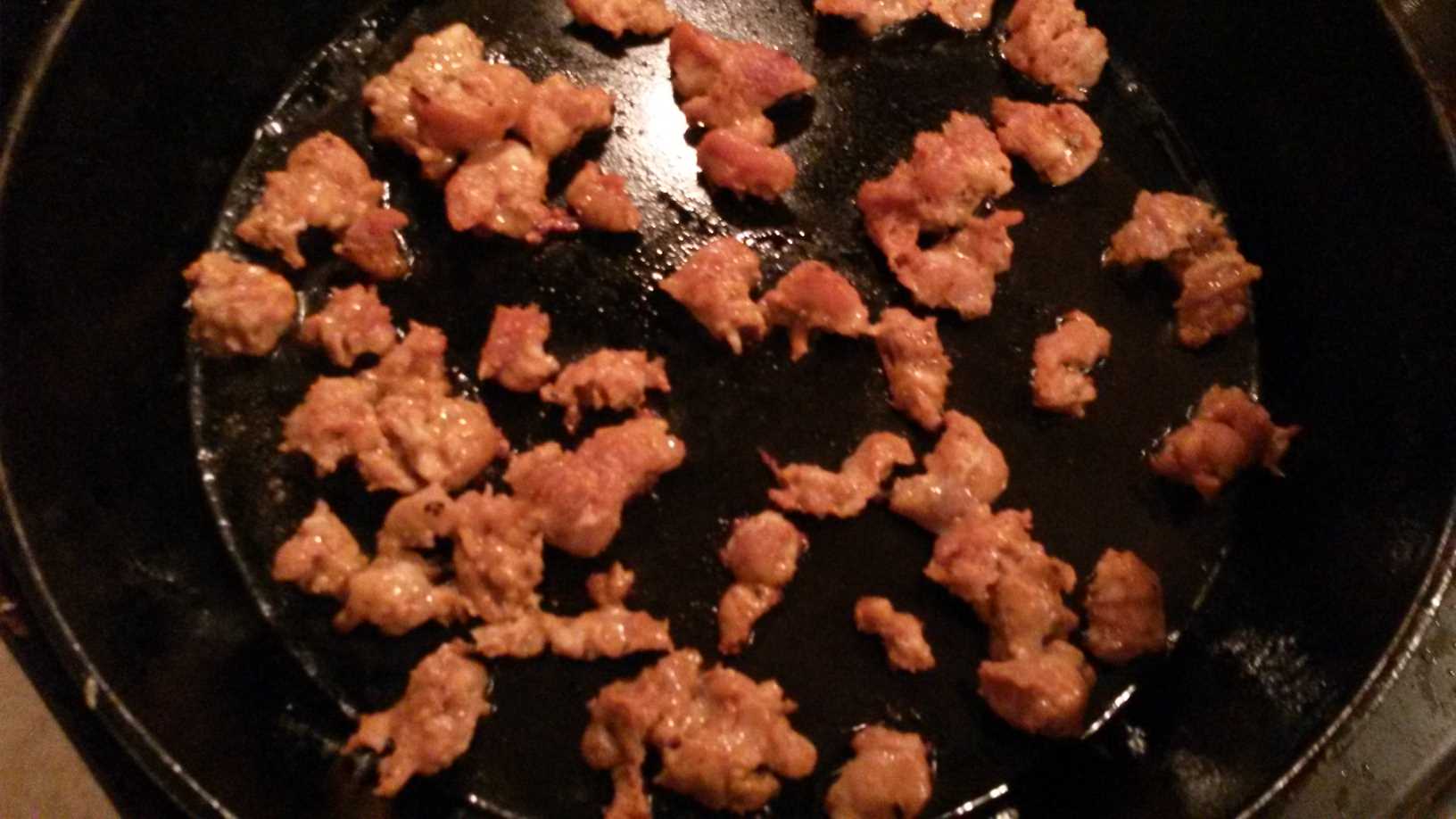 Brown Chorizo with the pan sprayed with no stick spray 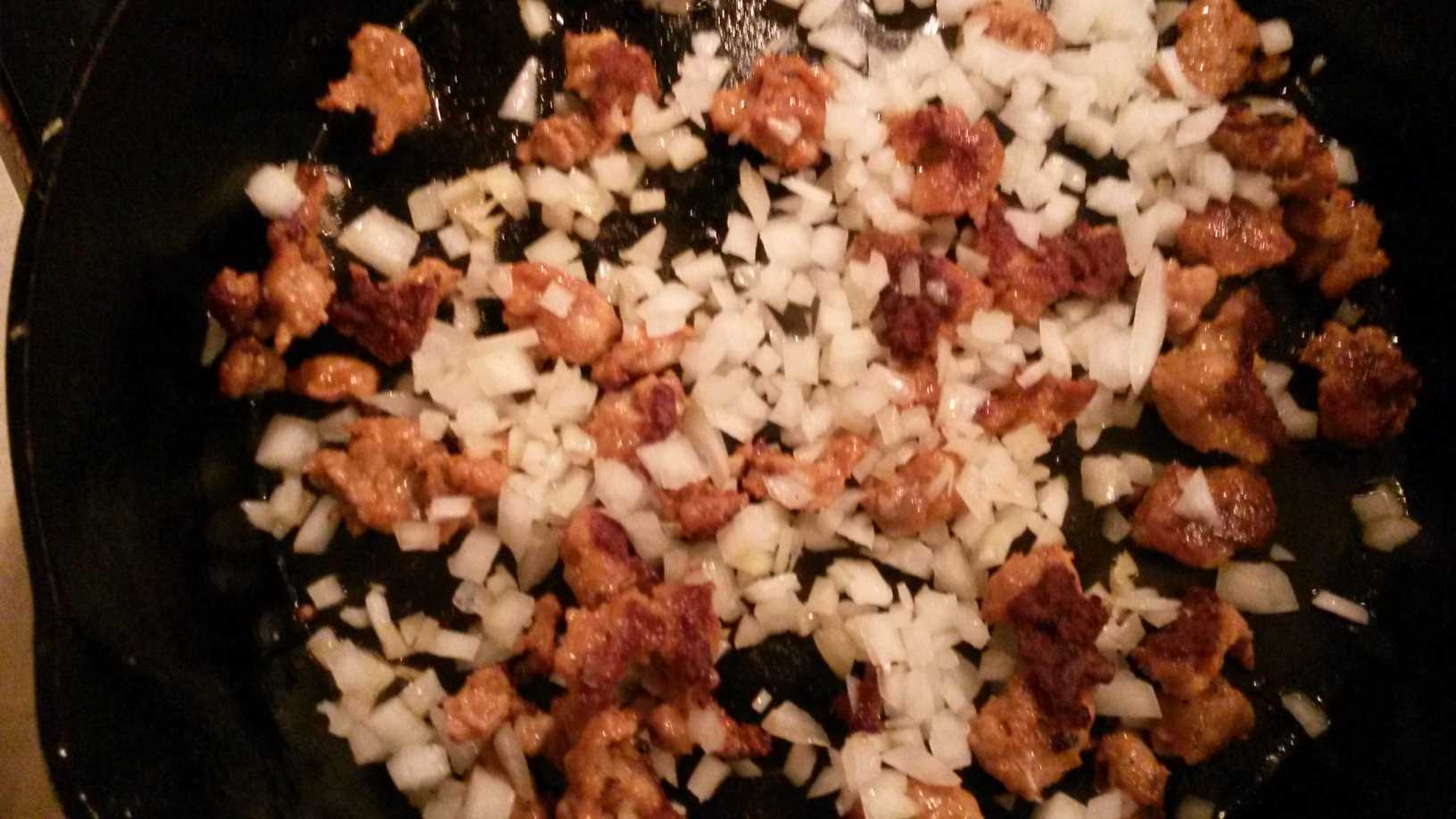 When the first side of the Chorizo has browned, add onions. 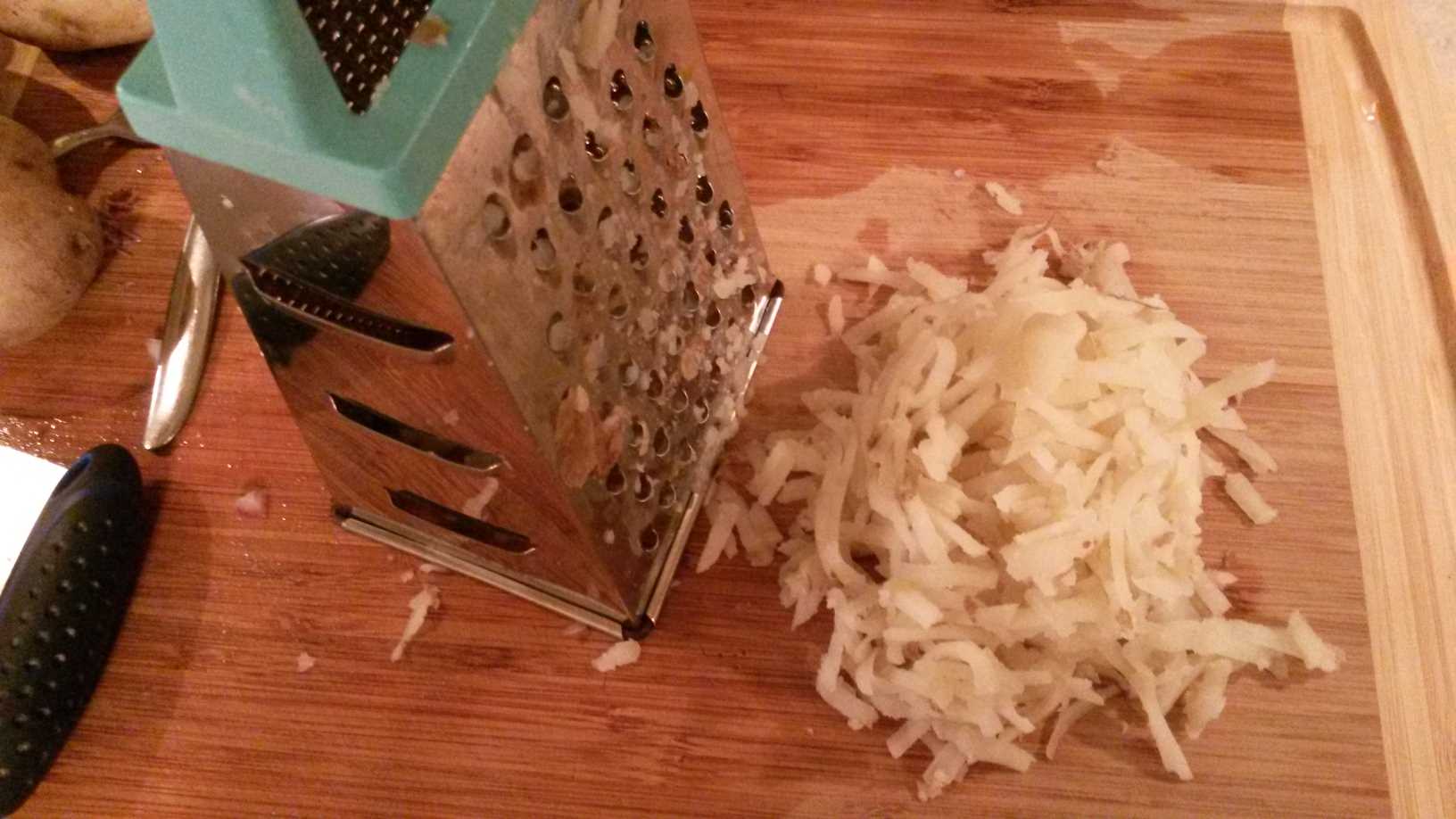 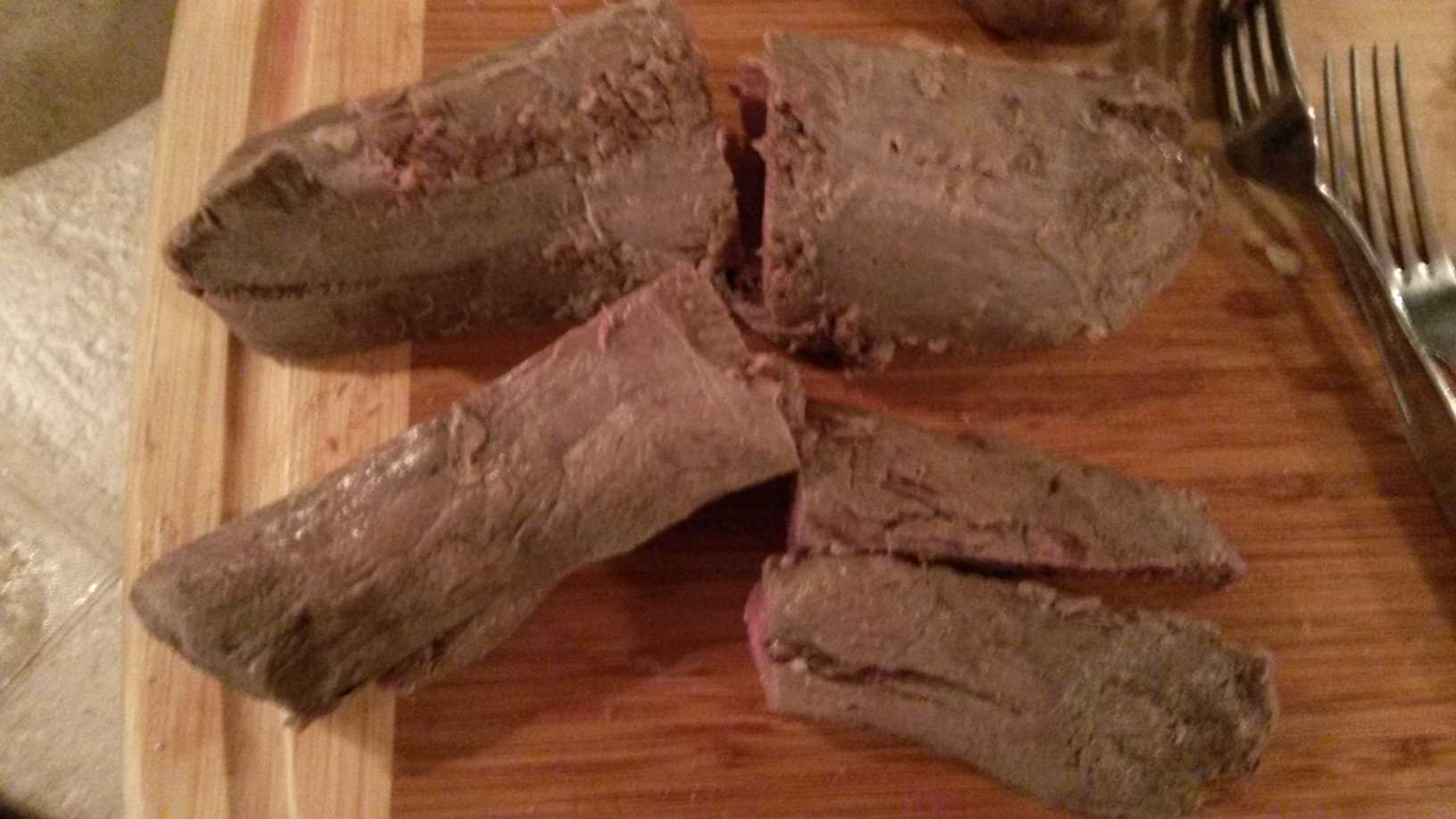 When using beef roast, you can shred the meat with two forks. Venison is more dense so cut the roast into smaller pieces and place a few at a time in a food processor. Pulse until the pieces are fairly fine. 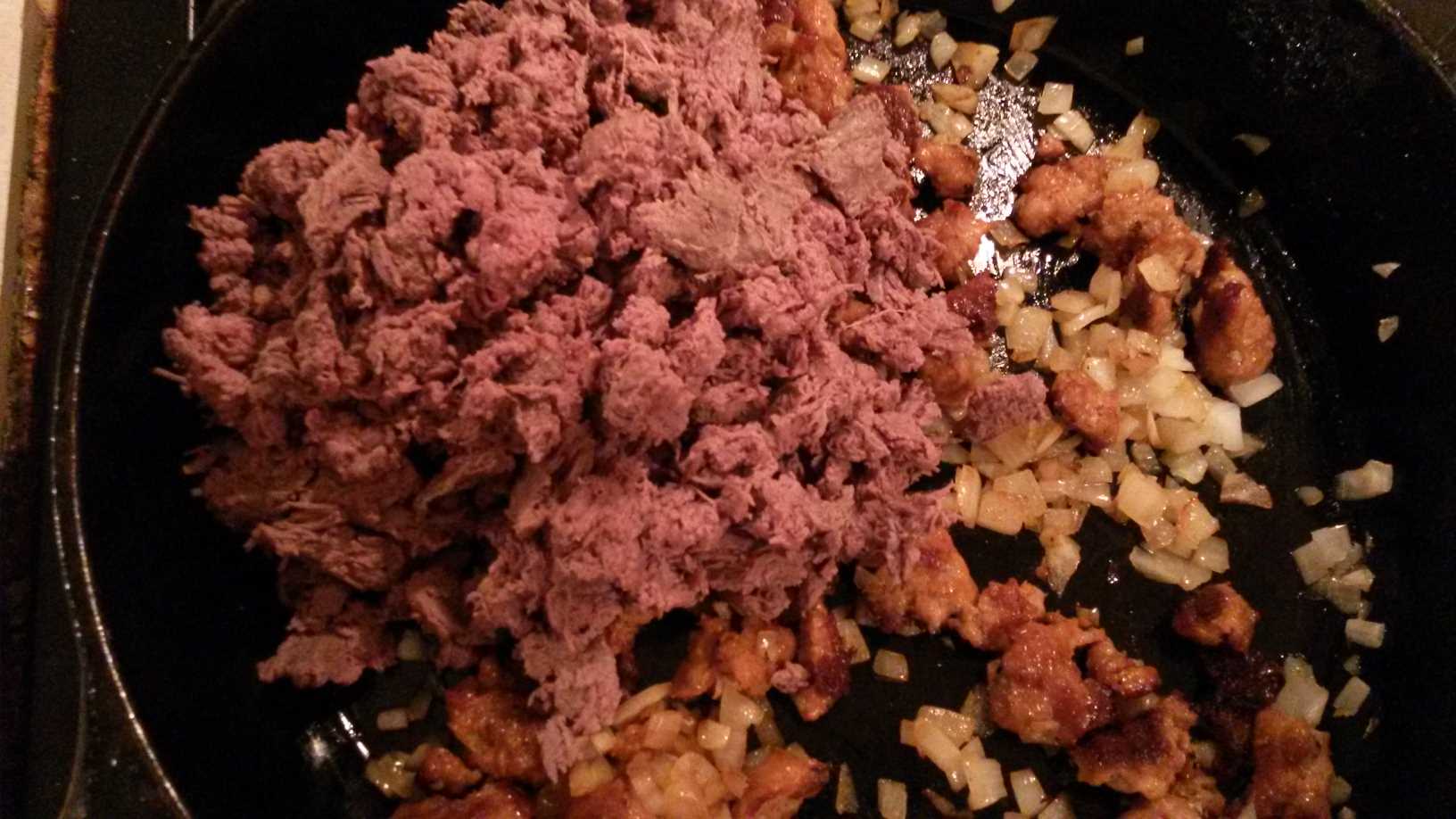 Oops, I forgot to take a picture of the food processor. but this is what the shredded meat looks like after a few pulses. Don’t over process!

At this juncture the pan should be turned down to very low.

Add the Venison or Beef, the grated potatoes, tomato sauce, and salt and pepper to taste to the Chorizo and onions in the frying pan.

Mix everything together. Normally I put a lot spices in Mexican dishes. Cumin, Coriander, Chili powder, etc. etc. These just don’t really require any spicing up. They are very flavorful without, especially served with you favorite salsa and some Guacomole or Frijoles Refritos (Refried Beans). (We use Fat Free Frijoles to keep the dish low fat) 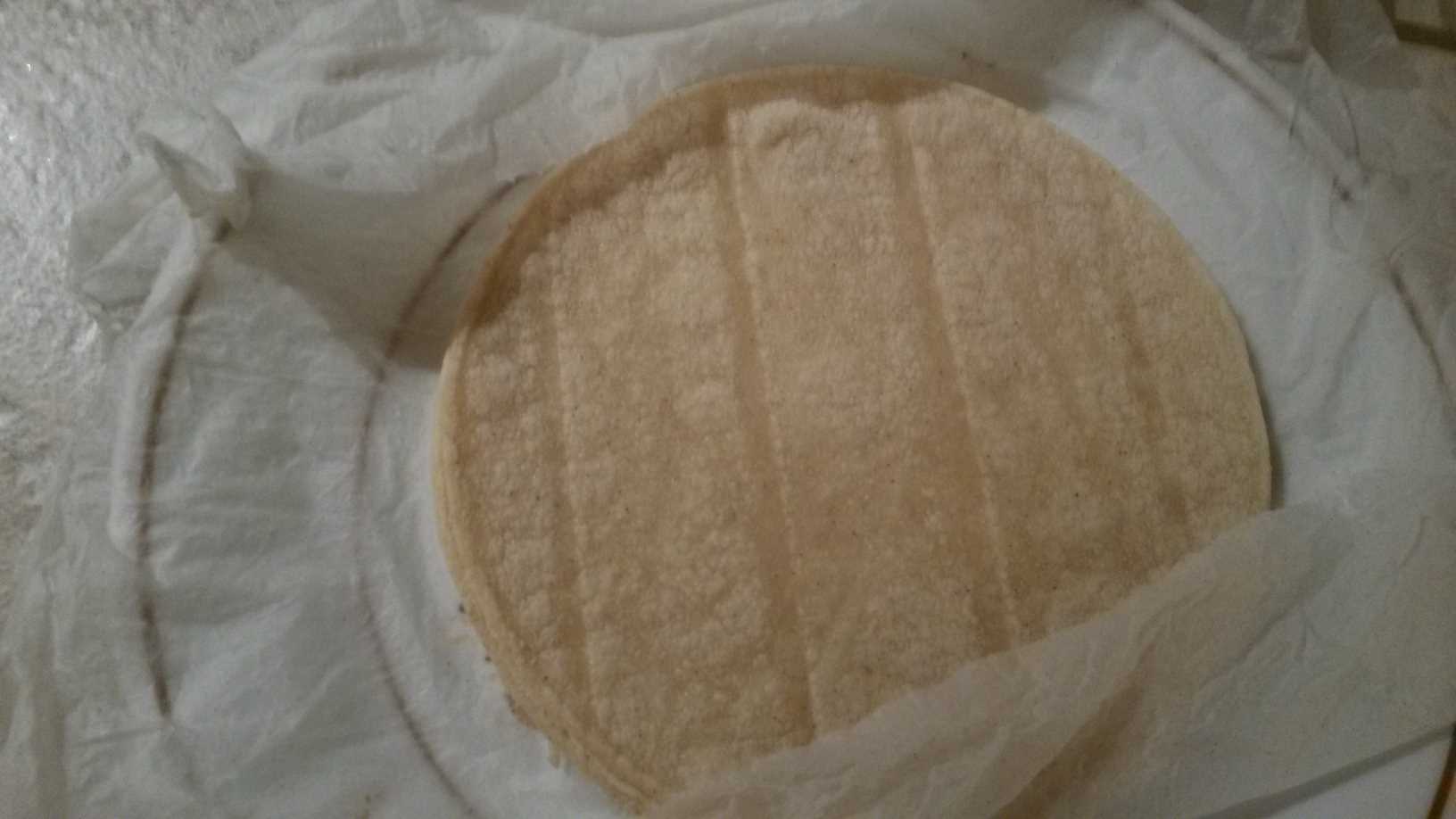 To assemble the taquitos, place a damp piece of paper towel on a small plate. Place 5 or 6 corn tortillas in the center of the paper towel. 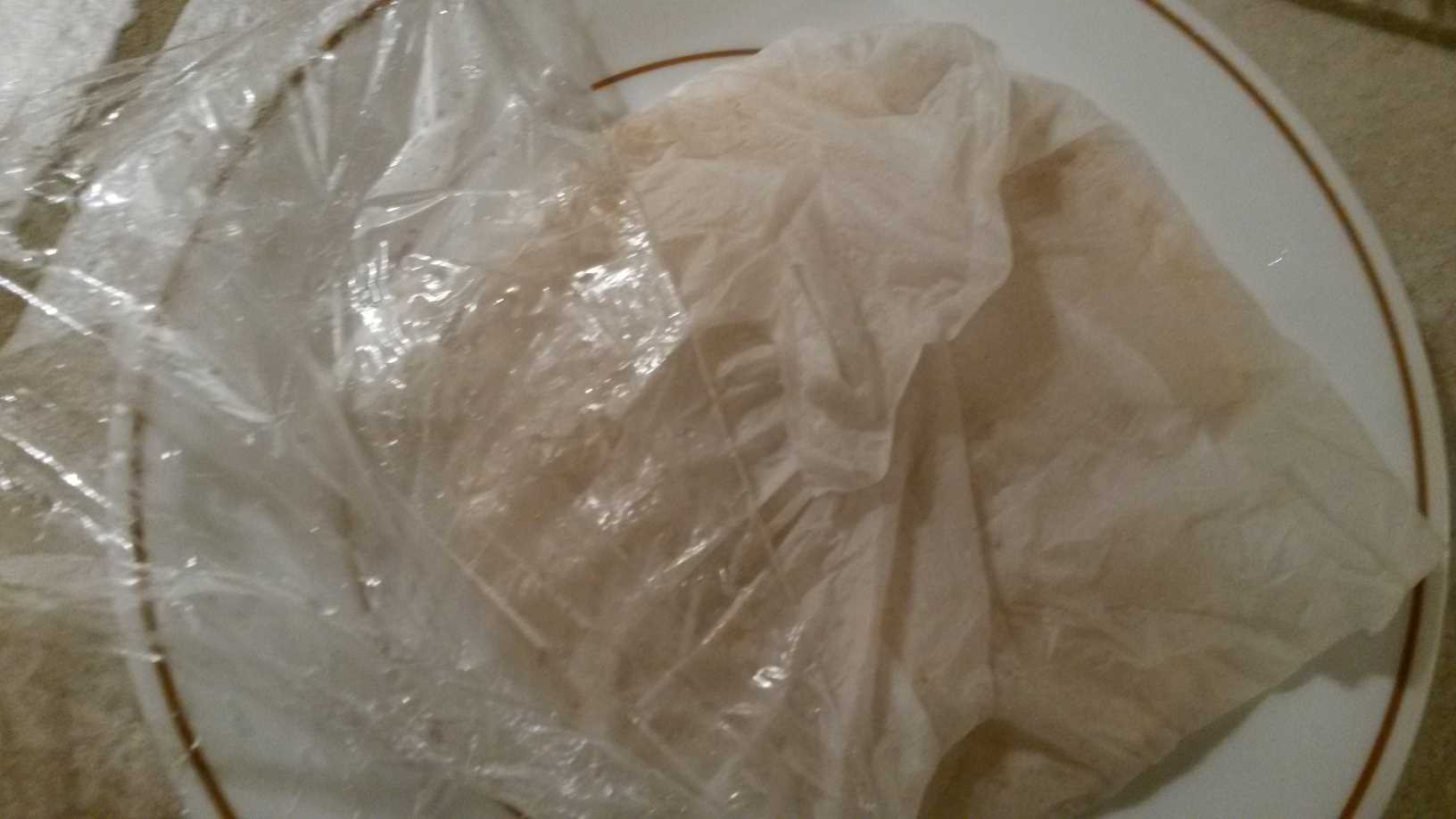 Fold edges of paper towel up and cover with a piece of plastic wrap. Leave one of the edges of plastic wrap tented to allow steam to be released. Microwave for 1 minute. They can also be softened in the oven in the same manner. In the old days we would soften the tortillas in hot oil for a few seconds on each side but then you add lots of calories.

Roll as tightly as possible on place seam side down on rack.

Place a small amount of oil in a small pan. Place taquitos, carefully, in hot oil, seam side down.

With a pair of tongs, turn taquitos when they are lightly browned.
It is really important that when you turn them the first time that you turn them the way shown in the picture above. If you turn them the other way, they will splay open and you have to physically hold them closed with your tongs. It also helps to have the taquitos touch each other. You can use a toothpick to hold them together but I just consider that another step so I don’t bother. Continue turning four times until all edges are brown.

Drain on a paper towel.

Serve with frijoles, or guacamole and your favorite salsas! You will never know these are venison! They are so delicious!

Some Other Mexican Dishes on BCC

Want to learn more about How to Cook Venison? Don’t miss our awesome, Ultimate Guide! Complete with 65 FREE Recipes from some of the top venison recipe developers in the world!

Tools I Use to Make Steak and Chorizo Taquitos 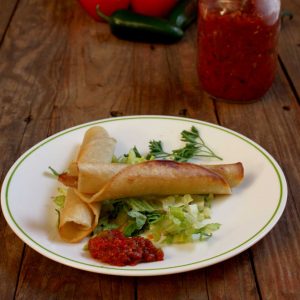 These Steak and Chorizo Taquitos couldn't be easier and require just a few ingredients. They can be made with any steak or roast you have.
See Step by Step Photos Above!Most of our recipes have step by step photos and videos! Also helpful tips so that you can make it perfectly the first time and every time! Scroll up to see them!
5 from 3 votes
Print Pin Rate
Course: Appetizer, Main Course
Cuisine: Mexican
Prep Time: 40 minutes
Cook Time: 50 minutes
Total Time: 1 hour 30 minutes
Servings: 48 taquitos
Calories: 123kcal
Author: Beth Neels
Cost: $5 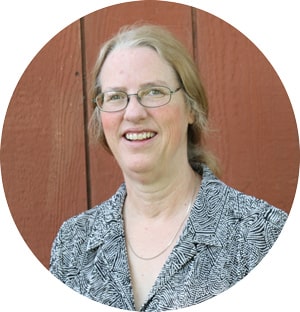 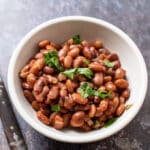 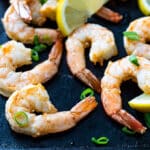 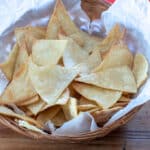 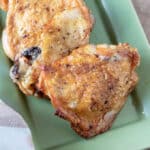